Steven R. Adams has been in the private practice of law since 2000. Prior to establishing his own private law practice, he was an Assistant Hamilton County Prosecuting Attorney for eight years. His law practice is focused on criminal and DUI defense. Mr. Adams has been qualified to administer the Standardized Field Sobriety Tests of NHTSA through the NHTSA Student Course (2001). In addition, Mr. Adams has successfully completed training for the NHTSA DWI Detection and Standardized Field Sobriety Testing Instructor Development Training Program (2003). Mr. Adams has been deemed as an expert witness on standardized field sobriety testing in Hamilton County. He recently hosted a seminar on the Role of the Expert Witness in OVI/DUI Cases. Mr. Adams is a member of the National College for DUI Defense, the National Association of Criminal Defense Lawyers, the Greater Cincinnati Criminal Defense Lawyers Association, the Ohio State Bar Association and the Hamilton County Bar Association and he serves as a board member for the Ohio Association of Criminal Defense Lawyers. Mr. Adams is also a member of the Ohio State Bar Association College. Mr. Adams received his B.A. degree from the University of Kentucky and his J.D. degree from Salmon P. Chase College of Law.

A graduate of Salmon P. Chase, College of Law in 1990, Steven R. Adams is an attorney, whose practice emphasizes the representation of individuals accused of criminal offenses. He has been in private practice since August 2000.

After law school and some time spent as a law clerk, he spent eight years working as an Assistant Hamilton County Prosecutor. Beginning in the Juvenile Division and finishing in the Felony Criminal Division, where he prosecuted adult felony cases including murder, rape and other sex offenses, drug trafficking and abuse, robbery, burglary, felonious assault, arson, felony DUI, aggravated vehicular homicide and felony domestic violence.

Steve’s numerous years of experience in the criminal law arena, have given him a tremendous amount of insight into the legal systems and workings of Hamilton County. He has seen the system from both sides and has a clear understanding of the work of Police Officers, Judges, Prosecutors, Victims and now the side of the Defense and the Accused.

In addition to his understanding of the legal world in Hamilton County, Steve has been very active in the community, serving as campaign manager for local political races, on the boards of local charities and civic groups and as a volunteer with Children’s Hospital and the Cystic Fibrosis Foundation. He has even represented Cincinnati in the Ironman Triathlon World Championship four times.

On the above referenced Courses, Steven R. Adams has spoken on the following topics:

Steve Adams is one of a select group of attorneys who has received a rating of “ Superb” from Avvo.com (a website that contains reviews and helpful information about lawyers in your area). This prestigious distinction is given to attorneys who are top-notch performers in their industry and who have been rated well amongst their clients and peers.

For more information on this Avvo rating, please click here.

Congratulations to Steven R. Adams who has been selected by his peers for inclusion in The Best Lawyers in America for his work in Criminal Defense: General Practice, and DUI/DWI Defense. Recognition by Best Lawyers is based entirely on peer review. Best Lawyers employs a sophisticated, conscientious, rational, and transparent survey process designed to elicit meaningful and substantive evaluations of the quality of legal services.

Best Lawyers® compiles its list of outstanding attorneys through tens of thousands of confidential peer-review surveys. Lawyers are nominated solely based on their professional accomplishments and contributions to the legal field, and cannot nominate themselves or pay to be included in the list. The 2016 edition of Best Lawyers in America includes more than 55,000 lawyers in 140 areas of practice, and was compiled based on more than 6.7 million peer-review surveys. To be included in this list is a huge accomplishment that truly speaks to Attorney Adams’ outstanding skill and reputation in Ohio and throughout the country.

In addition to inclusion in Best Lawyers, Attorney Adams has also been named to the prestigious list of Ohio Super Lawyers® and has earned an AV® Preeminent™ Rating from Martindale-Hubbell®. As a result of the efforts of Attorney Adams, The Law Offices of Steven R. Adams, LLC has grown to be recognized as one of the most distinguished law firms in Ohio.

For further information on Best Lawyers®, please visit their website at www.bestlawyers.com. 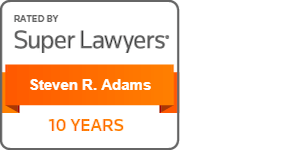 The Ohio Super Lawyers 2020 list is out and we are honored to have Steven R. Adams as one of Ohio’s Super Lawyers for the 10th year in a row. Super Lawyers is a rating service of outstanding lawyers from more than 70 practice areas who have gained a high-degree of peer recognition and professional achievement.