Our Cincinnati DUI Lawyers Can Challenge the Evidence

Standardized Field Sobriety Tests, also known as SFST’s, are comprised of three tests intended to determine whether an individual is likely to be above .08 percent Blood Alcohol Concentration (BAC). The research to develop the SFST’s was conducted at the Southern California Research Institute and funded by the National Highway Traffic Safety Administration (NHTSA) in the early 1980’s. Since that time, police officers and defense attorneys across the country have been trained and certified in the administration and interpretation of these tests.

At The Law Offices of Steven R. Adams, LLC, our firm’s founder is a certified instructor in field sobriety testing and is certified in the administration and evaluation of these tests. We have created this page to help clients better understand what to expect during these tests.

During vehicle stops, officers check for the following when evaluating and scoring the tests:

Nerves, weather conditions, certain medical conditions, and even footwear or lack thereof can affect performance on the tests. The interpretation of the tests is a subject of controversy because of their subjective nature, especially without videotape evidence. It is important to remember the tests are voluntary. You can politely refuse to perform the tests and ask to speak with an attorney. Learn more about the different kinds of tests that are used below.

Nystagmus is the natural, involuntary jerking of the eye as the eye gazes from one side to the other. Officers also look for smooth movement during tracking while conducting the test. The test is conducted while an officer holds a stimulus, usually his or her fingertip or pen, approximately twelve to fifteen inches from the suspect's nose and slightly higher than eye level.

Officers are looking for these six clues (three per eye) when conducting the test:

It is often impossible to find a designated straight line. In these instances, the individual should “imagine” a straight line while performing the test. The test must be performed on a dry, hard, non-slippery, level surface to be in compliance with NHTSA standards. Officers are checking for the individual’s ability to follow directions and physically perform the test.

Officers check for the following clues while conducting the test:

The test should not be conducted on individuals over the age of 65 or anyone with a physical or balance illness, disease, malady, or infirmity. The National Highway Traffic Safety Administration (NHTSA) also notes that individuals 50 pounds or more overweight would have problems doing the one-leg stand test.

Officers check for four clues while conducting the test:

Unfortunately, despite “training” and “certification,” there is always room for error. In our defense, we can and have attested to the fact that these tests are often not administered properly. We identify any errors by analyzing any questionable or suspicious methods, the subjectivity of officers, and other circumstances involved during the administration of tests.

Given that these tests are voluntary, politely refuse to submit to all tests and ask to speak to a DUI/OVI attorney or drug crimes attorney. If you did choose to perform these voluntary tests, we will evaluate the results as well as the report officer's interpretation, to identify any weaknesses in the evidence. Our firm can vigorously defend you by presenting the solid evidence, especially regarding your alleged insobriety during the traffic stop or refusal to submit to testing. If at any time during the progress of your case, you have questions, do not hesitate to reach out to The Law Offices of Steven R. Adams, LLC for answers. 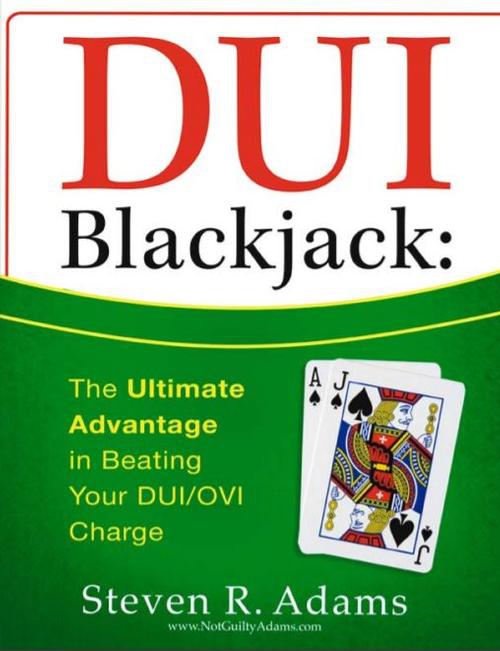 DUI Blackjack: The Ultimate Advantage in Beating Your DUI/OVI ChargeGet The Free Offer