What Is The Penalty For Refusing To Take A Breathalyzer Test in Kentucky? 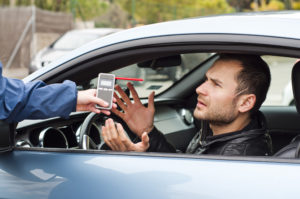 The penalty you face for refusing to take a breathalyzer test in Kentucky depends on whether or not this your first refusal. However, in any case, you will face a license suspension and potential jail time.

Getting your driver’s license is a privilege, and it implies an agreement between you and the Commonwealth of Kentucky that you will follow certain rules. One of those rules is that you will allow police to test your blood, breath, or urine if they have reason to believe you are driving while under the influence of alcohol or drugs.

If you refuse to submit to this type of testing, it violates the agreement you made when you got your license. For this reason, the state will suspend your driver’s license. Even if the court finds you not guilty of drunk driving, you will need to serve the suspension for violating the implied consent statute.

The State Will Suspend Your Driver’s License

Refusal to comply with a Breathalyzer test can be punished by a suspension that lasts as long as the applicable DUI under the circumstances. How long your suspension lasts relies on several factors, but it primarily depends on your history of drunk driving arrests or implied consent violations. The lookback period is 10 years. In general, you can expect:

Even if the state drops the DUI charges, you plead guilty to a lesser charge, or they find you not guilty at trial, you will still likely face this license suspension for refusing the breath test.

In addition to the penalties for refusing to submit to a breath test, you will most likely still have to answer to drunk driving charges as well. If convicted, you could face:

Your violation of the implied consent statute means you will also face stiffer penalties after a drunk driving conviction. Most significantly, this affects the time you spend in jail and your ability to obtain a hardship license to drive to work or school during your suspension.

The minimum jail sentence attached to your drunk driving conviction will be twice as long as the mandatory minimum if you refused a breath test. For example:

For subsequent offenses, this can mean a significant increase in the time you may have to spend behind bars.

A refusal will also bar you from applying for a hardship license for some time. This can be problematic, since many people rely on this type of permit to get to work or school, to see their doctor or go to addiction treatment, and to run other necessary errands. Not being able to drive for the full period of your suspension may mean losing your job, having to take time off from school, and relying on others to help you take care of yourself.

However, your Judge does have the discretion to grant an Ignition Interlock license even when you refuse a breathalyzer, urine, or blood test. This is applicable so long as you waive your right to challenge the refusal.

If the Judge allows you to serve your refusal suspension with an Ignition Interlock suspension, you will be responsible for paying for the installation and supervision of the device for the duration of your suspension. But at least you will have driving privileges. Be aware this privilege is at the discretion of the Judge and is not a guarantee.

The best way to avoid these enhanced consequences is to prevent a conviction. Our team will work to fight the charges you face, creating a defense strategy that works to clear your name or minimize the penalties you face. Contact us as soon as possible after your arrest, and we can try to help you get a more favorable outcome in your case.

Will I Face Penalties for Refusing a Field Sobriety Test?

No. In Kentucky, you have the right to refuse preliminary roadside tests including both physical tests such as “walk and turn” and the Portable Breath Test. These tests are given as a part of a traffic stop where the police officer believes you may be under the influence of alcohol or drugs, along with other field sobriety tests. Implied consent only goes into effect after they arrest you for a DUI offense.

Talk to a Kentucky Drunk Driving Defense Lawyer Right Away

Kentucky law affords you the right to call an attorney after your arrest and before they require you to take a breath, blood, or urine test. If you are not sure what you should do, do not hesitate to call us. The right is limited such that you are only allowed 10-15 minutes to contact an attorney. The officer must give you a reasonable opportunity to contact an attorney including access to your cell phone and the phone numbers stored in your phone number.

To be sure you can meet this short window, we recommend saving Steve’s number (513-659-4442) in your cell phone – under Steven Adams or Not Guilty Adams so you have it available when you need it most.

If you already refused to take a Breathalyzer test and now face Kentucky implied consent and drunk driving charges, it is not too late to give us a call. The Not Guilty Adams team will review your case and aggressively defend your rights. Call the Law Offices of Steven R. Adams, LLC today at 513-929-9333 to get started.

Call our office today at (513) 929-9333 or fill out our online contact form below to set up your initial consultation.
Sign Up for Our Newsletter