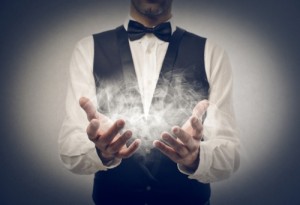 They’ve done it, folks! The Po Po and the government have succeeded in becoming masterful magicians. Every day, police stations across the country pull off a magic trick of epic proportion resulting in scientifically unfounded charges against drivers. How do they do it? With their magic machines!

The Po Po relies on this government-sanctioned “magic machine,” also known as a breath tester, breathalyzer, or Intoxilyzer, to test your breath for alcohol. They have created a great and grand illusion in presenting these machines as accurate and reliable. We hate to spoil the magic trick, but the truth is that many of these machines have not been sent back to the manufacturer for regular maintenance and repairs for over 15 years. In addition, calibrations are only completed after every 7 days when they should be calibrated before every test. Would a hospital treat their life-saving equipment this way? They certainly would not, so it makes no sense that police stations should fail to do the same, especially when your freedom is on the line.

THE PO PO MAGIC BREATH TEST IS NOT SCIENTIFICALLY RELIABLE

When administering a Breathalyzer test, police officers may instruct you to blow harder and longer than you actually need to for them to obtain an accurate reading. This could result in skewed results, indicating a false positive. Worse, they only administer one test. In order to achieve scientific accuracy, two tests should be performed. Results should be within a target zone of one another to make sure that there are no other contaminates to interfere with the results of the first test. Even cold pizza and mouthwash can fool breath testers, so there is no reason that police can claim that their magic machines are accurate!

Breath testing law is slanted in favor of the government. They want to be able to quickly and easily prosecute drivers suspected of DUI / OVI, but they are achieving this through junk science and illusion. If you are offered a breath test, either roadside or in a police station, remember: don’t blow and don’t blabber.

Exercise your right to a lawyer and call Steven R. Adams as soon as possible to begin building your defense. With the assistance of a Cincinnati DUI / OVI lawyer from The Law Offices of Steven R. Adams, LLC, you stand a greater chance of having your charges reduced or eliminated than if you attempted to fight your charges on your own.

Make sure the government doesn’t pull a bunny out of its hat by choosing to refuse. You have a constitutional right not to answer any questions asked by police, and you certainly don’t have to take an inaccurate breath test on their faulty machines. Say no-no to the Po Po, and call our firm today!

If you or someone you know is facing DUI or other criminal charges in Cincinnati, OH, you need to speak with an experienced DUI lawyer. Contact us online or call our Cincinnati office at (513) 929-9333 to schedule a free consultation.