A Top Tip for Holiday DUIs: Choose to Refuse! 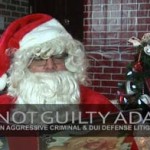 Listen to Steven R. Adams in this 2015 radio clip from Cincinnati's News Radio 700WLW.  (Steven was a guest on the show 9 times during the year.)

During the holiday season, remember that breath test machines are notoriously faulty and unreliable. If you’re stopped by the po-po for suspicious of a DUI/OVI in Ohio, the best thing you can for yourself is to choose to refuse. Do not agree to field sobriety tests, breath tests, or other chemical tests.

With no evidence to support the officer’s claim that you’ve been drinking, the prosecution has no case. It’s not your job to provide the evidence the government needs to get a conviction. All you need to do is say, “Officer, before I say or do anything, I’d like to call my lawyer.”

When you’re stopped by the man, call the man. The Law Offices of Steven R. Adams will help you get a not guilty verdict or an acquittal so you can get back to enjoying a holiday full of festive cheer.